Two of our Morocco tours that include Ait Ben Haddou: Ultimate Morocco and Glory of Morocco.

In the foothills of the High Atlas Mountains of south-central Morocco, on the old trade route between the Sahara desert and Marrakech stands the fortified village (ksar) of Ait Ben Haddou.  The indigenous Amazighen (Berbers) built many ksars in the area, but Ait Ben Haddou is the best preserved by far. It’s a UNESCO World Heritage Site and has been the setting for a long list of films and TV shows. Scenes from Lawrence of Arabia, The Man Who Would be King, Gladiator, The Last Temptation of Christ, The Mummy, Alexander and Game of Thrones (Yunkai) were shot here, to name just a few.

Within the thick, earthen walls, a maze of narrow alleys lead to small dwellings and kasbahs (large dwellings). Most of the buildings are abandoned but several families still live on site. Artisan shops, vendor stalls and cafes serve the tourist trade, which some visitors feel detract from the site’s authenticity. To me, it seems perfectly authentic that residents should make the most of the resource that is their tourist-attraction home. For the most part, they offer quality handicrafts and are not pushy about it. Ait Ben Haddou was historically a way-station for merchant caravans after all, born to shelter traveling salesmen and nurture the agreeable deal. If mud walls could talk, tales of the dusty foreigners and exotic goods of old would spin through the streets with the Atlas breeze. Film crews, on the other hand, are decidedly not authentic to Ait Ben Haddou but are nevertheless appreciated by the local economy. 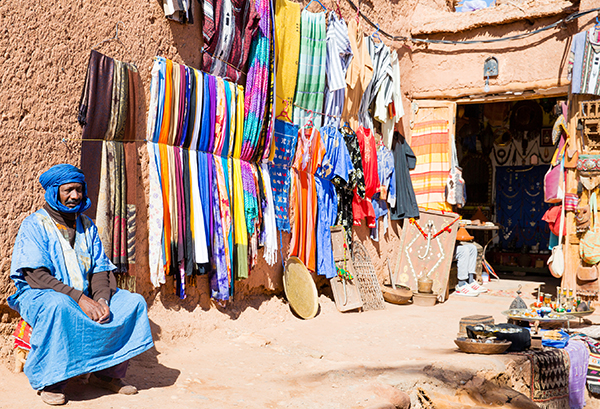 Ait Ben Haddou is about 30 minutes from Ouarzazate or a long day-trip from Marrakech. Take a couple of hours to explore and chat with the locals. You might be invited for tea. Hike up hill through the maze for ever-changing views of the surrounding countryside.